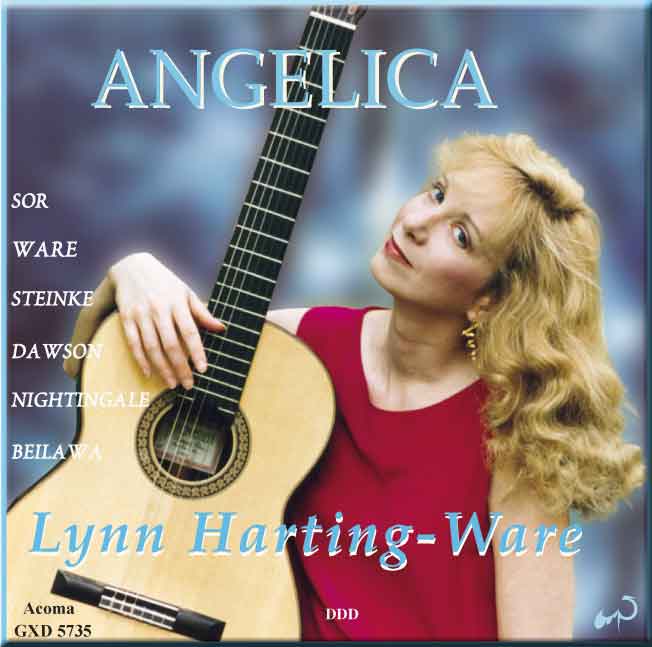 Four pieces of this program evolve from spiritual inspirations with the goal of transcending earthly confines. The spiritual aspects of these pieces made me feel as a type of "messenger" engaged in a totally non-verbal realm of communication. The music and pure sound, unencumbered by the burden of thought, are the vehicles through which one passes or connects to the metaphysical world.  Angelica is derived from the Greek word "aggelos" which means messenger. Universally, angels are distinguished as mediators and messengers between the human and the divine.  My hope is that these pieces will reveal their message of transcendence to every open mind willing to make the journey through sound.

Peter Ware's Elegy is a mournful remembrance with a sacred quality similar to Gregorian chant.  The Totentanz has a perky character articulated through a four-note motive which is spun-out with great energy.  Three for Guitar by Bruce Bielawa, is a dreamscape of sound in which fragments of music (short motives) emerge as images in a dream. that are seen, heard and perceived with meanings felt through emotion rather than reason.  Daniel Nightingale's A la luz de la luna llena translates as "in the light of the full moon".  Evocative tonal imagery recreates the transcendental walk along the shores of the Delaware River. Another New Beginning II by Greg Steinke, draws inspiration from a poem by K'os Naahaabii in which the poet rises above a night of misery to soar with the nighthawk.  The composer also draws upon the horrific events in the lives of the Jews as depicted in Schindler's List.  Added to this program of evocative pieces are three other exceptional pieces.  Fernando Sor's Variations on a Theme by Mozart combines the simple beauty of Mozart's theme from the Magic Flute with Sor's flashy guitar writing.  Doug Dawson's Baltimore Sonata is a contemporary work which combines traditional classical language and form with jazz harmonies and melodies, producing a wonderful tongue-in-check nod to jazz.  Pavanas and Canarios are popular pieces by Spanish composer Gaspar Sanz that need little in the way of description.